and the FWC were gay, they would be in a relationship with each other.

In January 2014, after the Royal Rumble pay-per-view, CM Punk suddenly left the WWE. Speculation was that he had died on the way back to his home planet. Others believe that he will return someday to claim what is his once again. In the meantime, he seems perfectly content to watch Chicago Blackhawks games and enjoy the company of his fiancee. 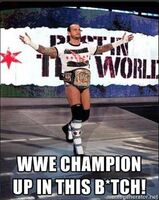