John Cena is a 13 time world champion, the 4th longest reigning WWE Champion by days combined, and has the 7th longest single WWE Championship reign in history. Like Hulk Hogan and Bruno Sammartino before him, John Cena functions as the centerpiece and poster child for the WWE.

Because his spot is so lucrative, and he such a high demand wrestler, WWE is overprotective of how he's portrayed on television. The truth is very similar booking tactics were used to great success in the past, like with the aforementioned Sammartino and Hogan. Since Cena is this era's babyface superman, he receives such treatment. This irks older wrestling fans who appreciate deeper characters with human vulnerabilities and flaws - the kind of storytelling you can find in pro wrestling, but not very often.

This clash between what one demographic wnats versus another has lead to friction in the greater wrestling audience. It's common for Cena to receive a mixture of X-Pac/Go-Away heat, genuine heel heat, and loud babyface pops.

Is a very commonplace chant for Cena when he wrestles. "You can't wrestle!" is another. Cena has openly acknowledged these chants and on occasion, eggs them on. One example was during his 2006 confrontation with Rob Van Dam at ECW One Night Only, where Cena performed more wrestling moves than usual to mock the viscious anti-WWE audience.

Is another common meme, displayed in text or caption on photos, which expresses mockery and frustration on the part of fans tired of Cena winning by the skin of his teeth.

Some fans want to cheer John Cena by him turning heel; others want storyline justification for the boos he receives. Others are just terrible fantasy bookers who project their desires onto WWE's product, in spite of all evidence saying their ideas would be terrible if executed. Wrestling fans are notorious for this "fantasy booking," which is the wrestling version of fan fiction. John Cena is subject to much of this, usually turning heel in some fashion, only to be slayed by the latest IWC darling - be it Daniel Bryan, Dean Ambrose, Antonio Cesaro, CM Punk, or whoever - whom these smarks usually refer to by their indie gimmick names, not the ones WWE gave them.

Heel to Some, Face to Others?[]

The Masked Man over at Grantland has repeatedly argued that Cena already has turned heel - to every fan over the age of 12. He believes WWE "trolls" fans by keeping Cena a kid-friendly face who winks knowingly to his frustrated, older detractors. 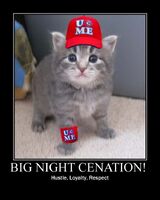 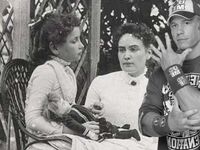 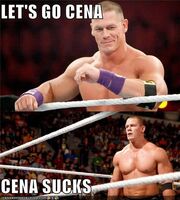 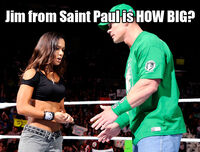 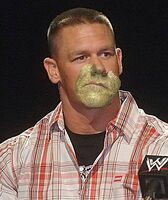 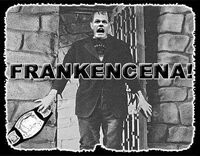