The Moss Covered Three Handled Family Gredunza is a LARP belt awarded to the fWc Farker who contributes the 1004th post to a  RAW, pay-per-view, or live Smackdown thread. The jpg of the belt has numerous variations in design, depending on the poster (or faction) that currently holds it.

The Gredunza belt originated in the August 29, 2011 RAW thread, when Dougie AXP managed to post the term precisely on the 1004th post of the thread. The term "Moss covered three-handled family gredunza" comes from a 1998 promo on "WCW Monday Nitro" by Chris Jericho. He was poking fun at Dean Malenko's nickname of "The Man of A Thousand Holds" by claiming he knew 1004 holds and stood in the ring while he listed them all. (side note: the MCTHFG was actually #3 on the Jericho list)

Jericho's reference to the MCTHFG (pronounced "gredunzle" by Y2J) is a shoutout to the Dr. Seuss book "The Cat in the Hat", which featured a miracle machine by that name.

The Gredunza has been "botched" several times in its history, most notably in the 1000th RAW broadcast thread, when it was botched by Gunny Highway. To date, the Gredunza has been vacated only twice; once by order of the office of Zombie Jack Tunney, and once when RAW was so horrible, then-champion slamjack decided the belt was no longer worth defending. Also, when TheManofPA won the Gredunza on September 16, 2013 due to a fast count, the belt was held in abeyance, since the term "vacant" is no longer proper terminology in the WWE Universe.

Another rare Gredunza occurrence happened during the September 10, 2012 RAW, when the Gredunza belt was not defended after Jerry Lawler suffered a near-fatal heart attack on air. It was decided to award the Gredunza to Lawler, though it should be noted that the King has yet to arrive to claim his LARP belt.

08/31/15 marked the 300th time the Gredunza had been officially contested.

As of 05/07/18, a total of 92 Farkers have won the Gredunza a combined 347 times. It has been botched 29 times and declared void once (see history above, "abeyanced" titles are still counted in this win total).

The first multi-title thread Gredunza occurred on 11/20/11 as verbaltoxin won on the 2008 post.

ShiningWizard has won the most multi-title thread Gredunzas with 6 wins all at post 2008.

The only non-WWE thread Gredunza was won by FirstNationalBastard on 06/10/12 during a TNA Impact broadcast.

Many Farkers have won back-to-back Gredunzas starting with Dougie AXP winning the first 2 in such fashion. Only That guy on the bike and SpiritualRemains have won 3 in a row.

ShiningWizard (2012-2019) holds the record for most consecutive years with a Gredunza win at 8.

ShiningWizard holds the record for most Gredunza wins in a year with 9 in 2014.

ShiningWizard holds the record for most consecutive months with a Gredunza win at 7 from December 2013 to June 2014.

ShiningWizard is the all time leader for Gredunza wins at Pay Per Views at 10.

On 05/19/15 my lip balm addiction became the first Farker to complete a belt sweep when he won the I AM THE TAG TEAM CHAMPIONS, Gredunza and Last Man Standing in the Monday Night Raw thread.

One of the earliest custom Gredunza belts, a spinner made for Jim From St. Paul

The second custom version of the Gredunza belt.

A ponied version of the second custom Gredunza belt

The Gredunza belt, after being retrieved from the river slamjack tossed it in 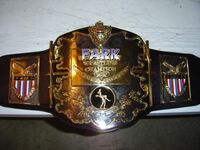 That guy on the bike's custom Gredunza belt designed by ShiningWizard

DrunkenGator's 'Crud-Dunza' belt, found in a dumpster behind the SuperDome after winning.

Clintster's Gredunza belt, earned April 29. 2014, and based on the Mid-Atlantic championship belt. Design by ShiningWizard

I Am The Tag Team Champions (belt)